Who is Dr. Ilhan New?

The late Dr. Ilhan New was born in Pyeongyang on Jan. 15, 1895 as the first son of his father, Gi-yeon New. He went to the US in 1904 at the age of 9 by the hand of Jang-hyeon Park, a diplomatic minister of Korean Empire. While supporting himself financially, he graduated from Kearny Elementary School, Hastings High School, and University of Michigan. Then, he received the Master's degree of Business Management at the Graduate School of University of Southern California and studied International Laws at Stanford University. In 1965, he received the Honorary Doctorate Degree of Laws at Yonsei University. In 1919, when he was a student in the US, he coauthored and announced the Resolution Elucidating Koreans' Purposes and Aspiration at the Korean Freedom Convention held in Philadelphia. Later, he played a key role in establishing the Mangho Army for national independence against Japanese imperialism consisting of Koreans in the US, and served as a special agent in the NAPKO project of Office of Strategic Service (OSS), a fighting plan against Japan, actively contributing to the independence of his fatherland. After coming back to Korea in 1926, he established Yuhan Corp. and fostered it as one of the top pharmaceutical companies in the world. He passed away in 1971 at the age of 76.

Dr. Ilhan New was an exemplary businessman who left new business ethics in Korea as well as an educator, a social worker, and a fighter for independence. As his contributions were recognized, he was given the posthumous award of Order of Civil Merit, Mugunghwa Medal, the highest national award at his death in 1971 and the Order of Merit for National Foundation, the Independence Medal at the 50th Anniversary of Korean Independence in 1995, and was selected as the Cultural Person of June by the Ministry of Culture and Sports in 1996.

As Dr. Ilhan New's lifelong accomplishments were evaluated, various memorial events were held by various groups of people around the centenary of his birth (Jan. 15, 1995). As part of the centenary memorial events, books were published, including 'Special Issues of Review of Business History: Dr. Ilhan New (Vol. 9, Review of Business History),' 'A True Businessman Who Loved the Country Ilhan New,' 'Ilhan New Collection, Yuhan Corp.,' and 'Study of Ilhan New's Independence Movement with many other reminders commemorating him. 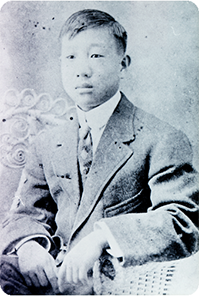